There’s something almost magical about the Winter Olympics, at least in my mind. These games generate a different reaction.  Maybe because as a country we tend to perform better (medal more frequently) in the winter games, or maybe it’s because “our” game is a winter game, or maybe it’s just because we all need a break in February, or maybe it’s just nice to have something to talk about besides the next storm headed our way.

I especially enjoy watching figure skating and curling (because I have some understanding of the sports).  I’m fascinated by other sports that I know nothing about but are entertaining to watch (speed skating, bob sleigh, luge) and will basically watch any sport that happens on the screen over the two week period.

This obsession with sport appeared to reach an apex this week with the women’s and men’s hockey finals. It’s been fun to watch status updates from people who are normally not sports fan (I would fall into that category) cheering on Canada.  It’s odd to say that a game was a national bonding moment, but really it was.  From bars opening early (with liquor laws changed to accommodate the early morning start) to traffic photos of no traffic on the 401 outside Toronto, it seemed everyone was watching “the game” 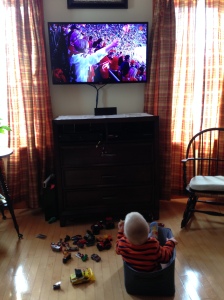 Good luck trying to reach anyone in Canada today. pic.twitter.com/Ky7j9eulgb

We all have different opinions on so many things, but for one moment we all were on the same side.  Tomorrow, it’s back to the regular routine…at least for another 4 years.

#RoomService how I’ve missed you. #Dessert #AuntBonAlert
Good Morning! #KnitHappens #GrandManan #BayOfFundy
One more row to join #ISeeGrannySquaresInMySleep
Supper in #NewBrunswick - #Fiddleheads and #Scallops
I’ve lost track of how far behind I am …Day 92 of the 100 day project.
I’m a day behind! Day 91 of the 100 day project.
Loading Comments...
%d bloggers like this: