My father’s birthday has been April 10 for many years now: more than I’ve been around, obviously.  So I don’t know why I was so surprised on Saturday when I realized his birthday was less than a week away.  It happens every year around this time.  I’ve started knitting a pair of socks for Father’s Day, but somehow I completely lost track of his birthday.

A large yarn stash comes in handy for these last minute gift emergencies.  Dad is toque person, but I’d made him one last year, and he wears them until they are in tatters.  I decided to try something a little different, at least for him.  I made him a hat with earflaps. 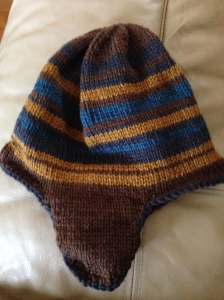 I had recently purchased the pattern Surefire Hat.  I usually love Susan B. Anderson’s patterns, and this was no exception.  The yarn was Mission Falls 1824 Wool, which I love and still can’t believe is no longer being made.  It was a quick, easy knit…at least until I got to the last step – the crochet edging.  I could crochet many, many moons ago but it’s not a skill I would say is in my repertoire. I hauled out a crochet hook and muddled my way through on the ferry yesterday morning.  I can only hope that my awkward attempts were not witnessed by an actual crocheter. I’m sure it looked like a complete disaster, but it got the job done.  I LOVE this hat! 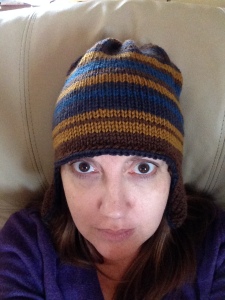 I’m pretty sure by the time next winter rolls around, I’ll have done another one for me. 🙂