I had this crazy idea last week that I should make BBQ sauce for my Father’s Day Barbecue on the weekend.  One: because I’d watched a bit too much of the Food Network; and two: because my oldest nephew has a corn allergy and BBQ sauce is one of those things that is sometimes challenging to find. (My brother and sister-in-law offered some from their stash; I chose not to believe it was because they were fearful of how my experiment would turnout.)

I pinned a couple of recipes that looked relatively easy (i.e., within my skill set) and able to be made corn free. The first was a basic barbecue sauce. The second was a maple whiskey barbecue sauce. 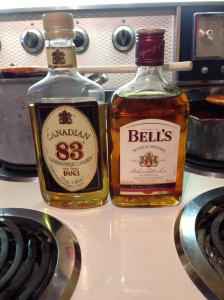 My whiskey and maple syrup look a bit alike.

Friday night I mixed them up and let them simmer away: 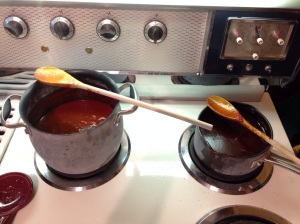 It was surprisingly easy except one of my pots was too short and the sauce simmered quite vigourously. Everyone ate them and like them. Both sauces are good for up to a month in the fridge. It’s nice knowing what is in them and that there’s not a lot of additives or preservatives. While I’m sure I’ll continue to use store bought BBQ sauce, I can see me making a batch every now or then.

My only other tip would be this: the final step in the maple whiskey sauce is to puree the sauce in a blender until smooth.  This would be the step I skipped because I was sure I cut the onions up fine enough. I didn’t. The dollar store squeeze bottle didn’t hold up to the squeezing pressure required to extricate the onion stoppage.  Enough said.