I was in a meeting this morning when the news alert flashed across my phone: “shots fired on parliament hill”. Given the political climate right now it felt from the beginning that the outcome wouldn’t be good.

I got on the road and started driving, and other than a brief stop at McDonald’s (specifically chosen because there are televisions) my news has all been from CBC Radio. (Well, other than a couple of visits to Facebook and Twitter for updates from people in the area.) The few images I saw at lunch and online only supplemented the radio descriptions. Descriptions of places I’ve been fortunate enough to visit a number of times. One of the things that was mentioned time after time was how the Canadian parliament was very open for the public to witness.

Five years ago next month my then Member of Parliament invited me to visit his office for a tour of the Hill. I thought we would have the basic public tour that takes you to the door of various rooms that you can peak through to see what is inside. The tour I got was a “behind the scenes” view of Parliament. I remembering thinking at first we were going to be thrown out (or in jail, because I was pretty sure I shouldn’t be sitting at the desk where the Queen signed the Constitution). 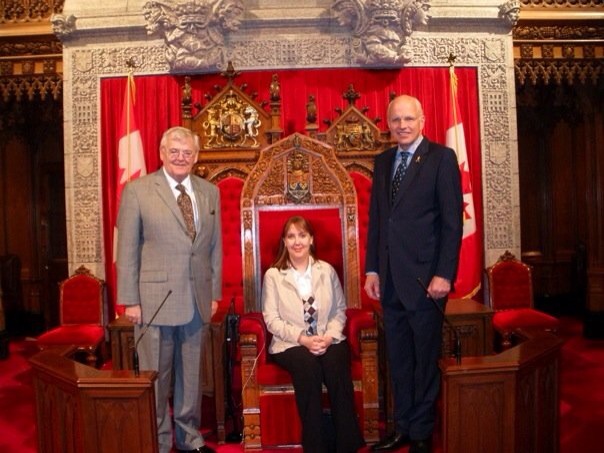 It happened to be a Wednesday we were there, which is apparently Caucus day. We may have been in the Hall of Honour, I’m not sure but the photo op we snagged with a Newfoundland Senator was taken by a PEI MP. 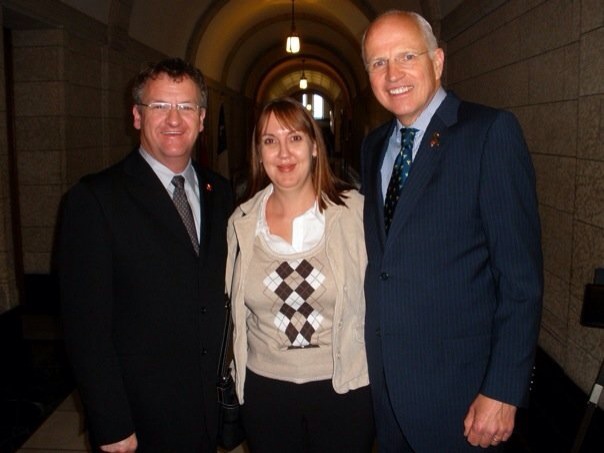 By the time we got to the Parliament Chamber, I was giddy and going with it. There were photo ops in Greg’s seat

and the Prime Minister’s.

We capped it off with a trip to the Parliamentary Library

Back to today where there’s preliminary talk about whether security changes will take place on Parliament Hill. I know it will have to be reviewed, but I can’t help remembering how excited I was. For me, it was and is a travel hi-light. A girl from remote, rural Canada seeing government up close. Meeting decision makers you normally only see in the news. I only hope that others will continue to have the opportunity to see that version of Parliament Hill and not one from behind barricades and partitions.

3 replies on “Five Years Ago”

#RoomService how I’ve missed you. #Dessert #AuntBonAlert
Good Morning! #KnitHappens #GrandManan #BayOfFundy
One more row to join #ISeeGrannySquaresInMySleep
Supper in #NewBrunswick - #Fiddleheads and #Scallops
I’ve lost track of how far behind I am …Day 92 of the 100 day project.
I’m a day behind! Day 91 of the 100 day project.
Loading Comments...
%d bloggers like this: