Where Have the Weirs Gone?

Last weekend I happened upon some old photos in a drawer. Despite my best intentions, they never seemed to make it to a photo album. One of the envelopes was from a Sunday afternoon in the mid 1990s that was spent at my father’s herring weir.

Herring weirs (sounds like “where”) are one of the oldest fishing gear types (it pre-dates Canadian Confederation in 1867). They are built in the shape of a heart, traditionally near the shore, with large wooden poles (stakes) surrounded by twine. Fishermen then wait for the herring to come inshore, swim along the net into the weir and become trapped, unable to find the way out. Fishermen then go with another net to “scoop” the fish out into a boat to be taken to be canned as sardines.

This day was a sparkling day on the Bay of Fundy. My grandfather’s health was beginning to fail, but he continued to go with my father to enjoy the process and help where he could. My mother, father, and brother were all there to work. My sisters, a couple of friends, and I were along as “tourists”. The photos from that day tell the tale – it was a magical, classic day on the Bay. * 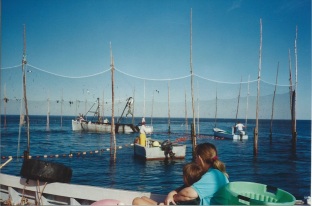 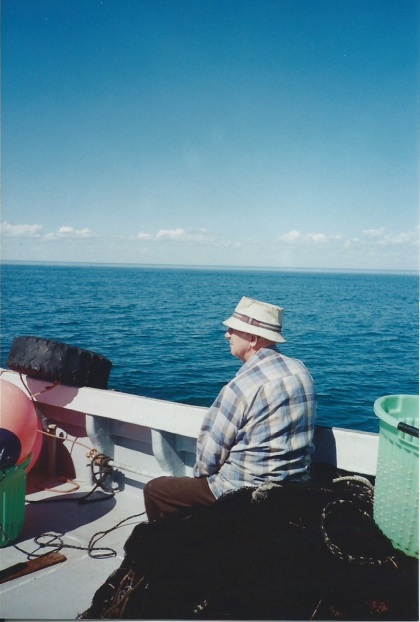 I had the opportunity recently to attend a herring science workshop. Since the mid to late 1990’s, the number of active fishing weirs around the island has dropped from over 50 to just over a half dozen. What was once a cornerstone of the economy in this part of the province has slipped away without any clear reason why the herring are not moving inshore. As other species became more profitable, the gradual slide generated little to no attention or concern beyond those directly involved in the industry. That was the focus of the day: bring together government, industry and academics to openly brainstorm about the issues. The conversation was good: there were a lot of possibilities, a lot of suspicions, but no clear answers.

While there was not a lot of optimism about the ability to solve the problem, at least the discussion has started so we may eventually know the “why”. It is quite possible though that what has changed the patterns of herring may not be able to be reversed. But maybe finding the reason will provide a lesson for fisheries moving forward. Sadly, the opportunities for crystal clear afternoons at the weir in the Bay of Fundy may have slipped away.

One thought on “Where Have the Weirs Gone?”