It was pretty clear heading into the weekend we would likely be facing some sort of snow day on Monday. By Sunday night blizzard warnings were up and the province (at least the southern part) shut down. With that in mind, it seemed like a good chance to knock out another dishcloth.

The Knit Picks pattern this week was the very appropriate Perfectly Preppy Washcloth. As I started knitting, I came to a realization: I had never knit intarsia before. To be honest I was never completely sure that there was a difference between that and fair isle (I thought it was just a fancy-smancy word for it.) However, a quick google search later I realized it was different; I’d never knit it before; and I’d clearly be weaving in a lot more ends than I generally like (again.) (Vogue Knitting defines intarsia as a colorwork technique in which blocks of color are worked with separate balls of yarn or bobbins. The yarns are not carried across the back of the work between color changes and must be twisted around each other at each change to prevent holes in the work.) 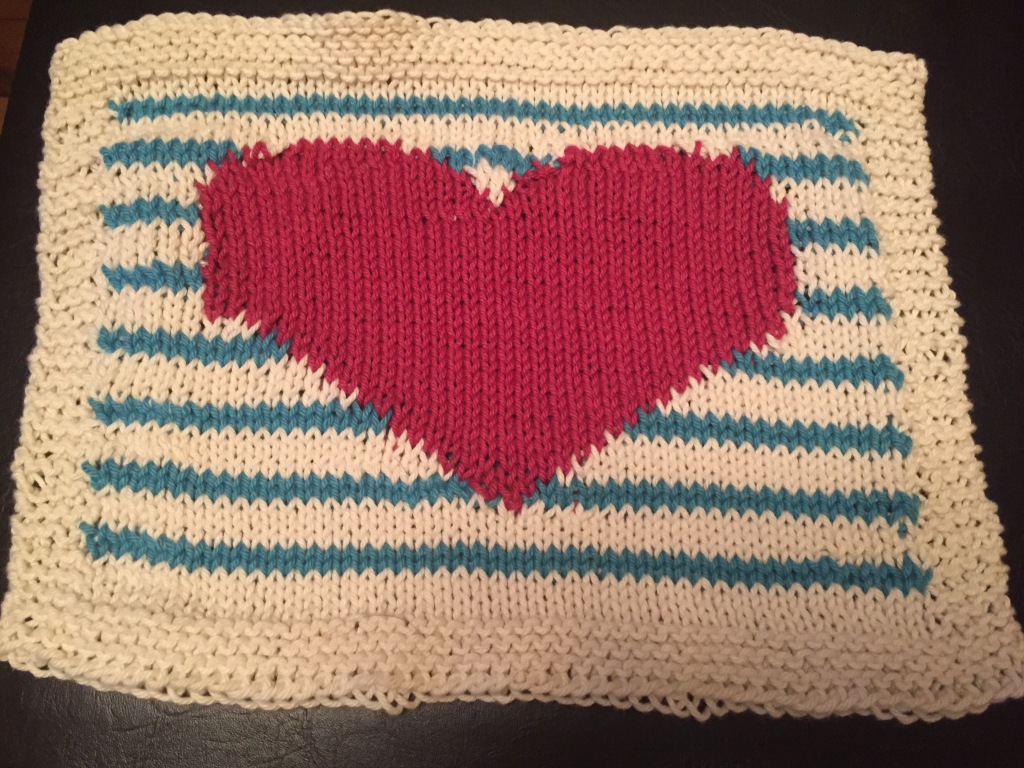 One of the things I like about dishcloths is the opportunity to try techniques without a huge investment of time or yarn. They generally only take a few hours and any mistakes are just going to be used to wash dirty pots anyway. My transitions between colours aren’t great, but they did get better as I went along. I did discover that snow days apparently completely impede by ability to count (hence the wonky side of the heart) and my ability to rationalize how many balls of each colour I would need (the fact I need three strands of white, two pink and three blue at one point blew my mind).

All in all, not bad for a first project. It may not become my go-to for colour work, but I will be more confident should I be faced with it in the future. And after untangling yarn for what seemed like half my knitting time, I’m thinking bobbins would be a wise investment.

One thought on “Valentine’s Day Dishcloth”